Tower Lord is an epic fantasy novel by Anthony Ryan. It is the second book of the Raven's Shadow series.

“The blood-song rose with an unexpected tune, a warm hum mingling recognition with an impression of safety. He had a sense it was welcoming him home.”

Vaelin Al Sorna, warrior of the Sixth Order, called Darkblade, called Hope Killer. The greatest warrior of his day, and witness to the greatest defeat of his nation: King Janus’s vision of a Greater Unified Realm drowned in the blood of brave men fighting for a cause Vaelin alone knows was forged from a lie. Sick at heart, he comes home, determined to kill no more.

Named Tower Lord of the Northern Reaches by King Janus’s grateful heir, he can perhaps find peace in a colder, more remote land far from the intrigues of a troubled Realm. But those gifted with the blood-song are never destined to live a quiet life. Many died in King Janus’s wars, but many survived, and Vaelin is a target, not just for those seeking revenge but for those who know what he can do.

The Faith has been sundered, and many have no doubt who their leader should be. The new King is weak, but his sister is strong. The blood-song is powerful, rich in warning and guidance in times of trouble, but is only a fraction of the power available to others who understand more of its mysteries. Something moves against the Realm, something that commands mighty forces, and Vaelin will find to his great regret that when faced with annihilation, even the most reluctant hand must eventually draw a sword.

The book follows four POV characters, each with their own separate plot lines that overlap and interweave to tell the story: Vaelin Al Sorna, Frentis, Princess Lyrna Al Nieren, and new character Reva Mustor. The chapters are divided into sections, each proceeded by a first person narrative recounting from Lord Verniers, the Alpiran Imperial Chronicler (much like Blood Song). Lord Verniers is in the captivity of a high-ranking Volarian noble, who commands the army attacking Alltor, and his wife.

Vaelin returns to the Realm determined to reunite with his sister and find his lost brother Frentis. After he disembarks from a ship, presumably from the Alpiran Empire, he encounters Reva, who is given the task of retrieving the sword of the deceased Trueblade, her father Hentes Mustor. Reva detests him at first, but gradually accepts his companionship and training when Vaelin tells her he knows where the sword can be found. She is confused as to why he trains her when she plans to kill him, but the blood song tells him it will be necessary later. They travel together until by complete happenstance, they meet Vaelin's old sergeant turned traveling minstrel Janril Norin and his wife, Ellora. They eventually reach Varinshold, where Vaelin finds his sister Alornis and Alucius Al Hestian, a former soldier and companion to Princess Lyrna, residing in his family's old run-down estate.

Vaelin attempted to keep his return to the realm a secret until this point, but he has no choice but to reveal his identity to petition for his sister and their family estate. He meets with King Malcius and his queen, who apparently is not of the Faith, and swears his loyalty to them. He requests the opportunity to search for Brother Frentis, however the well-meaning but weak King Malcius Al Nieren has other ideas, and appoints him Tower Lord of the Northern Reaches. Vaelin is initially tempted to refuse, but the blood song tells him to accept. After he consults with Alornis' master, the famed artist Master Lenial, and brief meetings with Brother Caenis (now Brother Commander), Aspect Tendris al Forne and Aspect Arlyn, they depart for the North, much to the reluctance of Alornis. Along the way, Vaelin reveals the truth about the Trueblade's sword to Reva, telling her he doesn't know where the sword is. He tries to convince her to leave her old ways and join them as a true friend and sister, but her internal conflict overpowers her and she flees, now armed with great skill in combat due to Vaelin's training. Alornis, who grew fond of Reva, is upset about this, but Vaelin soothes over her anger by telling her his complete history, including the details of his blood song and how it instructed him to let her go. In the north, Vaelin proves himself a peacemaker among the many Dark gifted people, despite his reputation and their initial uncertainty and hostility towards him.

We follow Princess Lyrna on her journey as an ambassador to the High Priestess of the Lonak. Her journey opens her eyes to many things, she meets a minion of the One Who Waits and finally finds proof that the Dark exists. However, she has countless more new questions than answers.

Reva, the orphaned daughter of the Trueblade, has been pushed to seek revenge for her father’s death, but after an encounter with Vaelin she begins to question many facts about her life. When she foils an assassination attempt on her estranged uncle, the Fief Lord of Cumbrael, she finally breaks from her past, and finds a family and a future as heir to the Fief Lord.

And finally, Frentis is in fact alive, and finds himself magically enslaved by a mysterious woman on an assassination spree all across the world in preparation for a dark purpose. The purpose is finally revealed when Frentis’s journey ends in the Unified Realm where he is forced to kill King Malcius, triggering the massive invasion of the Realm by the Volarian Empire.

Vaelin learns of the invasion from his Blood Song, and gathers an eclectic army of North Guards, some gifted northerners, Eorhil horsemen, Seordah warriors, the remnants of the Realm Guard, and his old friends and former brothers Caenis and Nortah.

Meanwhile, Princess Lyrna is taken captive by the Volarians like many of her people, but no one knows who she is because her face was badly burned during the initial attack. Thanks to her shrewdness and intelligence, and a surprisingly friendly shark, she escapes to the Meldenean Islands, where she and the Shield destroy the Volarian fleet.

At last Frentis has escaped his magical enslavement, and fights a desperate guerrilla war against the Volarians, during which he finally learns who is the mysterious Aspect of the Seventh Order.

The action culminates at the siege of the Cumbraelin capital Alltor, where Reva fights a desperate defence of the city against the Volarian host. Just as Alltor seems lost, Vaelin and his host, and Princess Lyrna and her Meldenean fleet, arrive and crush the Volarians.

As she walks ashore after the victory, Princess Lyrna is recognised as the new Queen of the Unified Realm. Now all she needs to do is free Asreal from the enemy, deal with the traitorous Renfaelins, and ultimately destroy the Volarian Empire and their ally the One Who Waits. At her side will be the ultimate warrior Vaelin Al Sorna, although he seems to have lost his Blood Song. What could possibly go wrong? 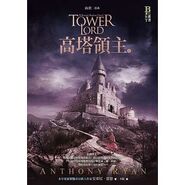 This article is a stub. You can help Raven's Shadow Wiki by expanding it.

Community content is available under CC-BY-SA unless otherwise noted.
Advertisement