Sentes a man aged by indulgence, with a sallow face, red rimmed eyes and heavy brows. Since his father has no plans for him, he's happy to indulge in all the vices Varinshold has to offer.

Sentes is sent by his father, the Fief Lord, to live in court in Varinshold. He loves court, overindulging in drink, whores, and redflower drug.

During the King Janus's campaign in the Martishe Forest against Cumbraelin deniers, some letters of free passage are found seemingly written by Fief Lord Mustor. The King orders Sentes Mustor to be put under house arrest, until the Fief Lord comes to court and explain why the these letters were in the possession of denier fanatics.

Some weeks later, his father is killed by his religious fanatic brother, Hentes. Sentes accompanies Vaelin Al Sorna's regiment to war in Cumbrael to kill his murderous brother. The King's forces are mustered under new Battle Lord Lakrhil Al Hestian, who leads the Realm Guard on the capital. Vaelin marches his regiment to join them. However, Sentes advises Vaelin to turn north and head for The High Keep, a secret fortress in The Greypeaks mountains.

At the base of the mountain upon which High Keep, Sentes leads them to a supposedly secret entrance to the fortress. However, the entrance has been recently blocked. Instead, Vaelin gets one of his soldiers called Gallis to make an incredible climb up the sheer cliff and keep walls, and lowers ropes for twenty others. Vaelin's small force infiltrate the fortress, and open the gate for the rest of the men. Meanwhile, Vaelin himself confronts Hentes, who is left dead in the end. Thus, Sentes becomes the undisputed Fief Lord of Cumbrael.

Fief Lord Sentes actually turns out to be quite a good governor; the streets are clean, trade is good, outlaws are kept under control. He seems to delegate much of his responsibility to his wife, Lady Veliss.

One night, Sentes is woken when three assassins burst into his bedroom. Suddenly, a person who does not know rushes into the room to defend him, killing two of the assassins before the last one flees. Rising from the bed uninjured, Sentes recognises his niece, Reva.

Reva is given a home by her childless and sickly uncle. And, in order to acknowledge Reva as his heir to the fiefdom, Sentes takes her to see The Reader, the head of the Cumbraelin church, a man who knows more about Reva and the assassins than he lets on.

Soon word reaches Alltor that the Volarians have invaded the Realm, and Fief Lord Darnel of Renfael has turned traitor and routed a large force of Realm Guards. Despite Veliss suggesting they flee, Sentes valiantly calls the muster of every man of fighting age, determined to hold Alltor rather than allow his people to fall to death or slavery; the walls of Alltor withstood all the attempts at siege during the wars of unification.

Three weeks later, the vanguard of the Volarian host reaches the city. A lone rider emerges from the Volarian ranks to offer terms for the peaceful surrender of Alltor. The Fief Lord sees no reason to submit to the rules of war, and orders him killed. As the siege drags on, Sentes succumbs to poor health brought on by a lifetime of drink and excess. He spends more and more of his time convalescing in the Fief Lord's manor. However, when the fanatic followers of the Reader take his wife hostage, he rises himself from his sickbed. At the cathedral he finds Reva confronting the Reader. Reva and Sentes give an impassioned plea to those assembled, giving them hope by lying that they know Vaelin Al Sorna is coming to lift the siege. Seeing the crowd turning against him, the Reader tries to kill Reva, but Sentes kills him. However, the exertion has been too much for the Fief Lord, and he collapses to the ground, dead. Reva become the new Fief Lord, calling herself Lady Governess of Cumbrael. 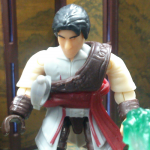